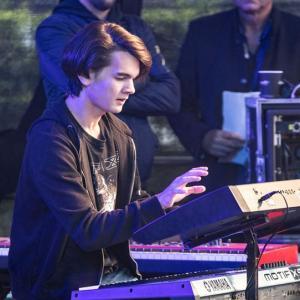 Jonathan Romppel: Born into a family of music lovers and surrounded by many artists and artistical experiences, Jonathan started to listen to music analytically at a very early age. He began with classical piano lessons at the age of five, later on he learned to play saxophone and developed decent skills on his own with ukulele, mouth organ, electric bass, guitar, electric guitar, drums and keyboards. He turned to jazz at the age of 14, focusing on piano and keyboards. Apart from performing regularly in his church, he joined and launched various bands, currently performing regularly with a jazz and a pop band, his Toto cover band and two big bands (keyb, b). He took part in the German “Jugend musiziert” contest (as backing musician with cembalo) and won the “Jugend jazzt” contest 2014 with jazz piano. He will finish school in Wiesbaden in 2016.His musical heros are Donald Fagen (Steely Dan), George Duke, Jeff Lorber, Cory Henry (Snarky Puppy), among many more.