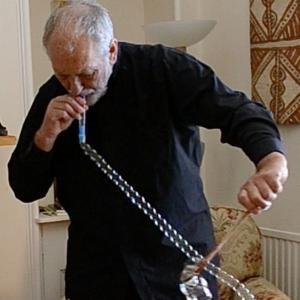 My masters are in storytelling, poetry(haiku) and cross cultural communication

Storytelling
Story telling is well recognized as an exceptional communication skill which stretches the imagination and improves listening and verbal dexterity skills.

Philip Noble has a post graduate degree in post modern communication and will use his expertise to work with you to help develop your storytelling and communication skills in an enjoyable and memorable fashion. He has over thirty years experience as a pastor/storyteller and has visited many countries, collecting and sharing stories as he goes.
He encourages good ‘story listening’ as a prerequisite of storytelling.
Philip has a special interest in encouraging visual storytelling. He has developed the use of simple objects, such as paper string and soap bubbles to embellish his original stories and encourages others to use their own specific skills and interests in a similar fashion.

Poetry (Haiku)
Philip D. Noble has been writing Haiku poems for more than 15 years and his poems have been published in various magazines. He has regularly contributed to the Haiku in English column of Mainichi the Japanese English newspaper.

He has found that such deceptively simple nature poems help most people to look and think about things in a more calm and objective way. Everyday objects and ideas can be used to express significant or profound events. Haiku poetry has been likened to taking a picture without a camera.
While classic Haiku stresses strict rules such as 17 syllables and the inclusion of a season word and a sense of ‘wabi’ deep loneliness, modern western Haiku has grown in popularity and relaxed some of these rules. It is proving to be an ideal poetic tool for sharing on the internet.
Philip has led haiku workshops for groups in many different settings and is listed among the top 100 haiku poets in Europe for 2012.

Cross cultural communication
A decisive moment came for Philip when he saw an old man making a string game in Papua New Guinea. He realised the significance of being able to graciously receive in order to give. He discovered that string games are more than just a story telling medium; they are a living symbol of the beauty and power of effective communication.

In 1978 Philip co-founded the International String Figures Association to encourage and share all aspects of string figures including their role in cross cultural communication. This has led on to an exploration of the role of 'serious play' as a communication medium beyond the constraints of language.
Philip has shared his play skills in U.K, Japan, Africa, America and most countries in Western Europe, leading workshops in the U.K. and contributed to the International Council of Children's Play in Zurich, Paris and Lisbon. He has been a regular performer and workshop leader at the European Christian Artists seminar in Holland for 10 years and at four Festival David events in Spain.
Philip, who has degrees in Science, Divinity, postmodern communication and is ordained into Christian ministry, has found the saying of Ethnologist Dr A.C. Haddon of Cambridge University to be very true.
“ You will be welcomed anywhere with a smile and a loop of string.”