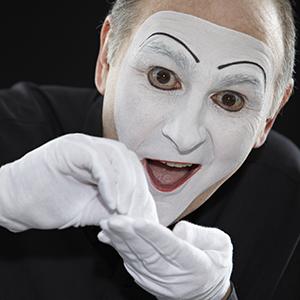 To all nations: Mime workshop

Carlos Martínez was destined for the language of gesture and complicity. And for over 35 years he has refined his craft in order to communicate freely around the world performing in theatres, schools, churches, civic centres and television. With his art, he embraces the spectator in a sincere and open conversation. And with his exquisite technique, he creates contrasting characters in an atmosphere of subtlety and wonder. He combines Mediterranean spirit and humour with precise rhythm to open up a world of suggestion and provocation.

His feature-length mime programs include award-winning shows such as “Hand Made” and “Books without Words” or concept shows such as “My Bible” and “Human Rights”. Seminars and workshops are an important pillar of the actor’s work; from pure mime workshops for beginners to advanced courses for prospective actors. He has recorded four DVDs and, inspired in many hours alone in front of the mirror, the book “From the Dressing Room” (2011) with a prologue written by Adrian Plass.

In 2018 Carlos Martínez received the “Special WMO Award” from the “World Mime Organization” for his outstanding contribution to the art of mime.