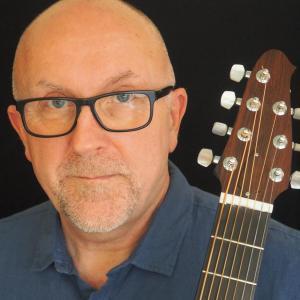 John FEATHERSTONE is a 7-string guitarist, singer, songwriter, composer and arranger based in Paris.

John specialises in juxtaposing classical and contemporary modes in his writing, and has a wide repertoire extending from solo concerts for 7-string guitar to multi-choir works with instrumental ensembles.

He has composed 5 full-length choral works, which have been widely performed throughout the French-speaking world, in in addition to the numerous instrumental pieces and songs he has written over the years. His TE DEUM for 2 full choirs and a vocal quartet, combining classical, gospel and jazz, should be released in 2017.

On the instrumental front, John composes, performs and records on the unique 7-string guitar built for him by Andy Manson.

In 2013 John was music director for a televised service uniting the Protestant churches throughout France, held at the 15,000 seater Bercy Stadium in Paris.  This involved arranging for, and conducting, a 1000-strong  choir and 47 piece orchestra.

He has recorded 12 CDs of his own music and his collaborative work is extensive. Performance contexts include cathedrals, theatres, village halls, churches, prisons, bars, and people’s front rooms.