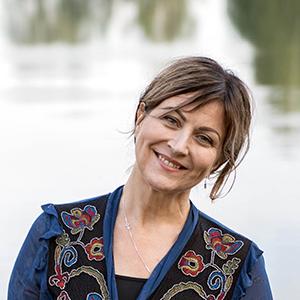 Christian communicator on stage - off stage, motivation and communication

Nina Åström - a Finnish singer-songwriter, evangelist and teacher - has worked in a variety of settings in 30 countries for over 30 years. Churches, concert halls, prisons, music festivals, the Eurovision Song Contest, slums, tv and radio - these are venues that she has worked in. Still her performances have this one thing in common: Nina Åström wants to have a direct and warm contact with the audience and wherever she goes, she seeks to convey mercy and truth in Jesus Christ. For the last 17 years she has visited some 350 prisons and drug rehabs in many countries, from the Russian Far East to the Middle East and more.

She has 15 music albums to her name, one of them (Avoin taivas) has sold gold in Finland and is close to platinum sales now. The most recent album was released in 2018.

Nina Åström is a fluent speaker of Finnish, Swedish and English. Communicating Christ is something she seeks to do in different ways whether on stage, in interviews or encounters with people. Nina has a weekly vlog on her Youtube channel.
She is married to Benni Åström, the couple has two grown-up daughters and one grandchild.